This album is Dirk Raufeisen and Götz Ommert’s first joint production after forming the duo in 1990. While Ray Brown and Oscar Peterson titles are the main musical focus of the album, it also contains pieces composed by the musicians themselves, such as “Run For Fun” or “Moving”. The duo set itself the goal of creating a new style with their own arrangements in order to bring new life to often-played swing standards and present them in an unique manner.

Götz Ommert, who studied double bass at the conservatory in Frankfurt/Main, is a sought-af- ter musician in the jazz scene and has worked together with numerous soloists of the HR-Big-Band, for example Heinz Schönberger, Conny Jackel, and John Oslawski.

Dirk Raufeisen’s piano skills and technique are reminiscent of his role model Oscar Peterson. He was the pianist for the well-known quartet “Lady Bass & The Real Gone Guys” and despite his youth, his technical skills and his distinctive swinging style have already been brought together with many jazz greats. Here are just a few names: Charly Antolini, Herb Ellis, Major Holley, Red Mitchell, Jimmy Woode. Dirk was the 1991 winner of the renowned youth jazz award “Jugend jazzt“.

Run For Fun was recorded in the newly established DIRATON recording studio. Dirk Raufeisen not only played piano, but was also the sound engineer for the album. Making use of multitrack recording techniques the duo suddenly became a quintet: in “Good Night Blues” Dirk also played guitar and drums and Götz added a second double bass onto the already existing recording. He also recorded an additional bass solo in “Black Orpheus”. Both musician’s deep understanding of music and excellent technical skills are celebrated in concerts. I hope this CD gets the recognition that it deserves. 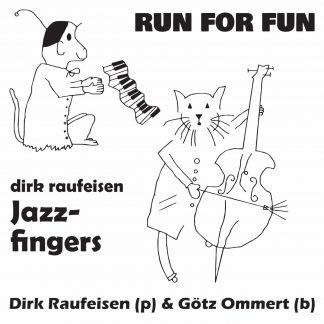